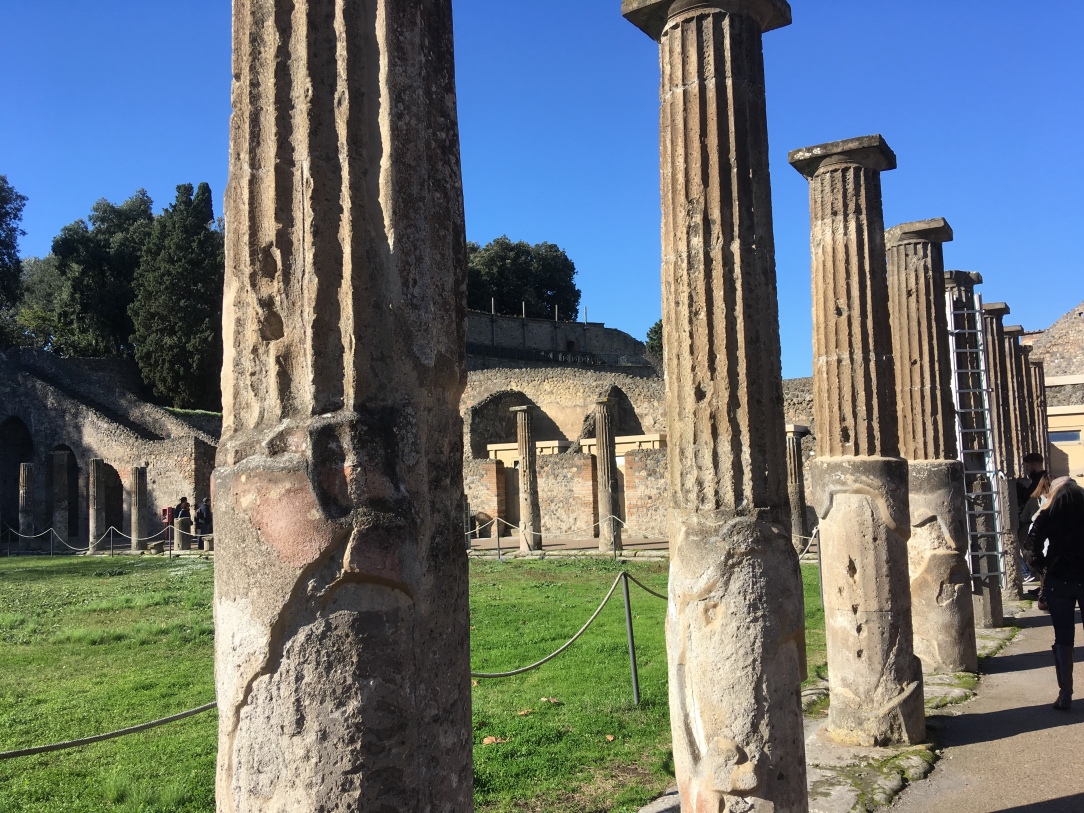 The next step of our trip was Naples, a town we don’t know a whole lot about except that it’s close to Pompeii and Vesuvius and has a reputation that there is lots of crime. That being said, it hasn’t felt any less safe than any other city I’ve travelled to so maybe what was once a thing, is no longer?

The truth is that the city is….chaotic. It’s old, graffiti and garbage everywhere, crossing the street is like playing the lotto because from what I’ve seen, there are no rules, and so long as you are good with all of that, the place is kind of fun.

Our hotel was in the old city, you can hear motor scooters zooming up and down the streets all day and night and we are in walking distance to all of the local highlights we wanted to see. At midnight somebody somewhere set off fireworks for no reason we could figure out…and yet it fits.

We spent our first day exploring. We visited the Museum of Archeology that houses the bulk of Pompeii artifacts, which was cool but the surprise bonus for me was the statue of Atlas. I’ve seen it in books growing up and never expected to just see it in person but there it was in all of its anatomically correct glory.

The Museum also has a collection of art and artifacts from Pompeii in the “Secret Room”. You’ve got to be 14 to get in and it houses “adult themed” works of art. It was…educational.

Next we walked over to Via San Gregorio Armenia, which is otherwise known as Christmas alley where you can buy hand carved nativities that are made right there. They are beautiful to be sure but surrounding it all is an almost overwhelming assortment of other Christmas tchotchkes, all tacky, noisy and out of sync with the nativities. It was crowded and while I’m glad we saw it, I think it’s also true to say that I don’t need to go back. One and done.

We did visit the subterranean caverns close by. Those were cool. Originally part of 400 km of Roman aqueducts, it was drained in the 1800s after being contaminated with cholera and was a bomb shelter for citizens in WWII.

Of note: 132 steps down and back up so bring your own portable defibrillator. Also don’t go with a group of athletes in town competing because you will be the only one gasping for air when the guide brings you up all 132 steps without a break in record time. 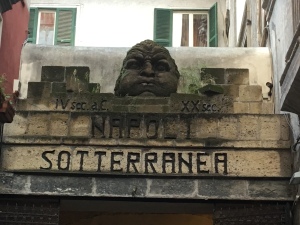 Lunch was authentic pizza at Sorbillo. They are one of THE pizza destinations and we were lucky enough to get there when there was no line. Delicious.

Dinner was pasta with clams and mussels and a lovely white wine.

Day one was very well spent.

Day two was meant to be the big birthday adventure that we had planned to see the Pompeii ruins and then walk to the top of Mt Vesuvius. If there is one thing Naples has taught me in its organized chaos is keep your plans flexible. We were late getting to Pompeii courtesy of a pair of lovely young honeymooners who had the bus wait outside for them during pickup. We weren’t bored though, someone was ill in the street and we had front tow seats to his urgent care team. I’m sure he’s fine because he was attended to by 3 paramedics, 4 police with rifles, another 4 men in business suits and a woman, presumably his wife. Blanket on, blanket off, blanket on, blanket off, use scissors to cut his expensive shirt open, leave blanket off, have him lift his head for the neck brace. Still no blanket. Everyone take a turn talking to him. On the stretcher, still no blanket, leave honeymooners behind, pickup next stop and circle back 15 minutes later because they are finally ready. Ambulance gone.

Pompeii was amazing, absolutely stunning and I’m so thankful we could go. It was not hard to imagine what it was like in Roman times because it’s been preserved beautifully. The streets have carriage ruts, we sat in one of the theatres, visited a villa, the spa, a brothel and the public square. Just amazing.

From there things went sideways again, Vesuvius was closed due to a landslide and we were offered a trip to Sorrento instead.

Sorrento was beautiful, I can imagine it is breathtaking in the summer high season but it was just gorgeous today. A few photos of the bay, a free limoncello tasting, time for delicious coffee in the square admiring the Christmas decorations, And back to Naples. 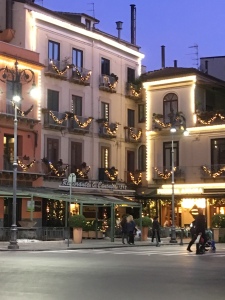 On the way back to Naples, almost another diversion when the truck in front of us broke down in the street. Literally you heard a bang and the trailer was on the ground so either the hitch broke, or the axel broke. I thought for sure we were going to be there for hours, but at least four men appeared out of nowhere and directed us around with centimetres to spare.

Last stop of our stay was dinner at a well rated but not upscale restaurant just up the street. Re Lazzarone is rated #35 out of over 2600 restaurants in Naples so we figured it would be a good spot for a birthday dinner. It did not disappoint. Fresh pasta, fresh ingredients, local wine, the perfect birthday dinner.

That’s a wrap for Naples, next stop, Rome.