Road Trippin’ Around The Rockies

By contentendedkitchen in Fun, musing, Travel, Uncategorized on July 19, 2018
2 comments

Time for another adventure, this time my husband and I headed to Western Canada to explore some new spaces and celebrate our 25th anniversary. Of note, our actual honeymoon was spent camping about an hour from home because we were unemployed and broke which isn’t the best way to start a marriage, so a little travel to celebrate twenty five years is acceptable.

We flew into Calgary Friday night and headed off to Budget to get our car. It was late and the staff everywhere looked exhausted because it was the tail end of the Stampede. However, the desk agent was still feeling enough love to give us a free upgrade to a super sweet SUV. Fully loaded, heated seats (I don’t care if it is July, I’m using them), leather everything, sunroof, and probably 16 other upgrades I never got the chance to appreciate. My husband’s dream car. Off to a stellar start.

We slept in an airport hotel and the next morning headed out bright and early into the Rockies. Within the hour the landscape changed to “wow” and we took probably 1092 photos of spectacular mountains along the highway drive.

Our hotel for the next three nights was located in Golden, British Columbia. High tourist time there is during ski season, so we actually got to benefit from less crowds. I won’t lie, I prefer travelling slightly off season, the introvert in me likes the space. 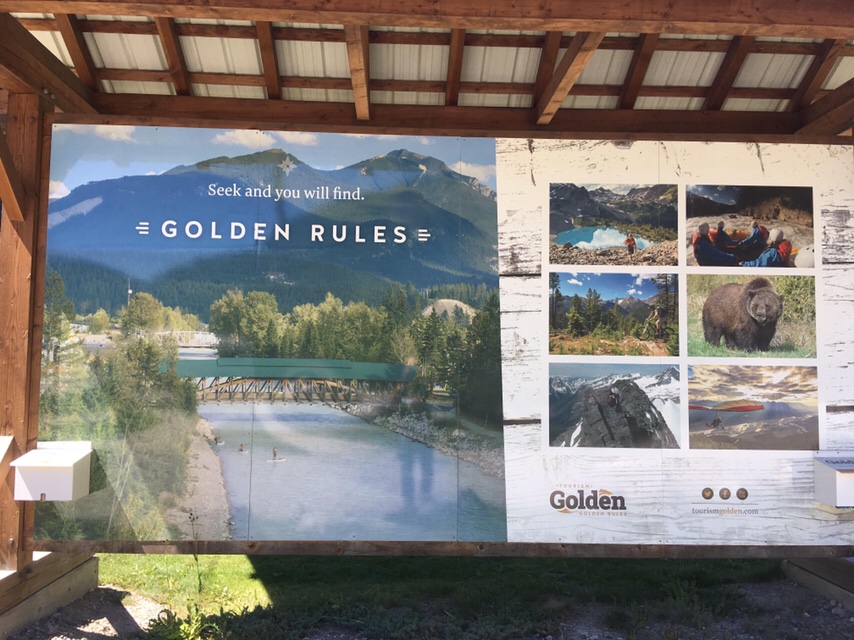 We spent the rest of the day seeing the sights of Golden itself. The pedestrian bridge is still fairly new and still smells like fresh cedar, the Kicking Horse River flows quickly and we spent some time walking along the path and enjoying fresh air, sunshine, rushing water, and nowhere else to be. 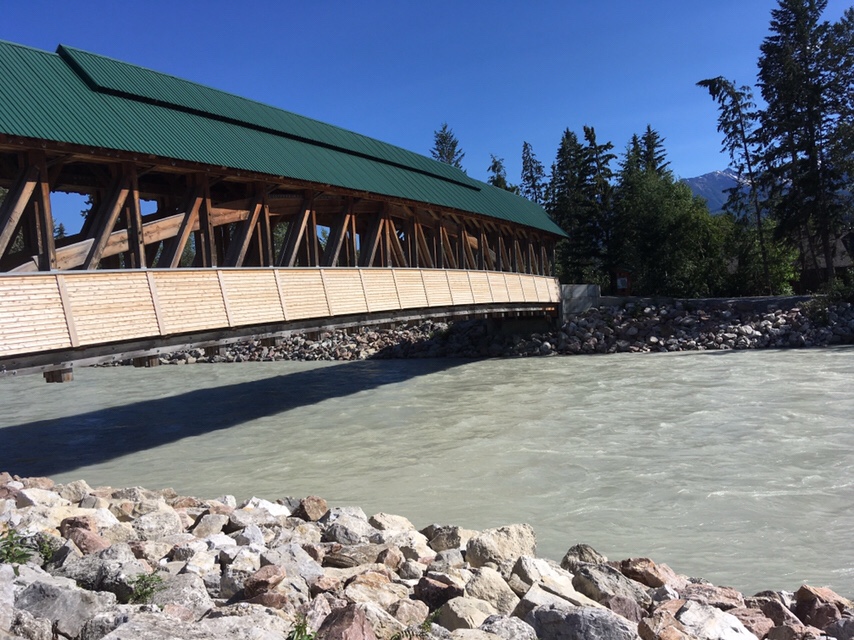 Dinner was at a BBQ/Smokehouse well rated by trip-advisor, and then we pretty much called it a day.

Day two was another drive down the highway in our sweet SUV to explore the countryside. We ended up driving up some logging roads (it was Sunday, no logging trucks) and spending time at Mitten lake and then Bittern lake. Absolutely gorgeous. I was watching a dad play with his kids at the beach, they were catching minnows with little nets and just having fun. Luckiest kids in the world right there. No wifi required.

The afternoon was what we planned to be the big highlight of our short trip, the ski resort on Kicking Horse Mountain is open all summer with hiking and biking trails, lift and gondola rides, and a grizzly bear sanctuary. We took advantage of all the things, rode the gondola to the very top and hiked one of the smaller trails. 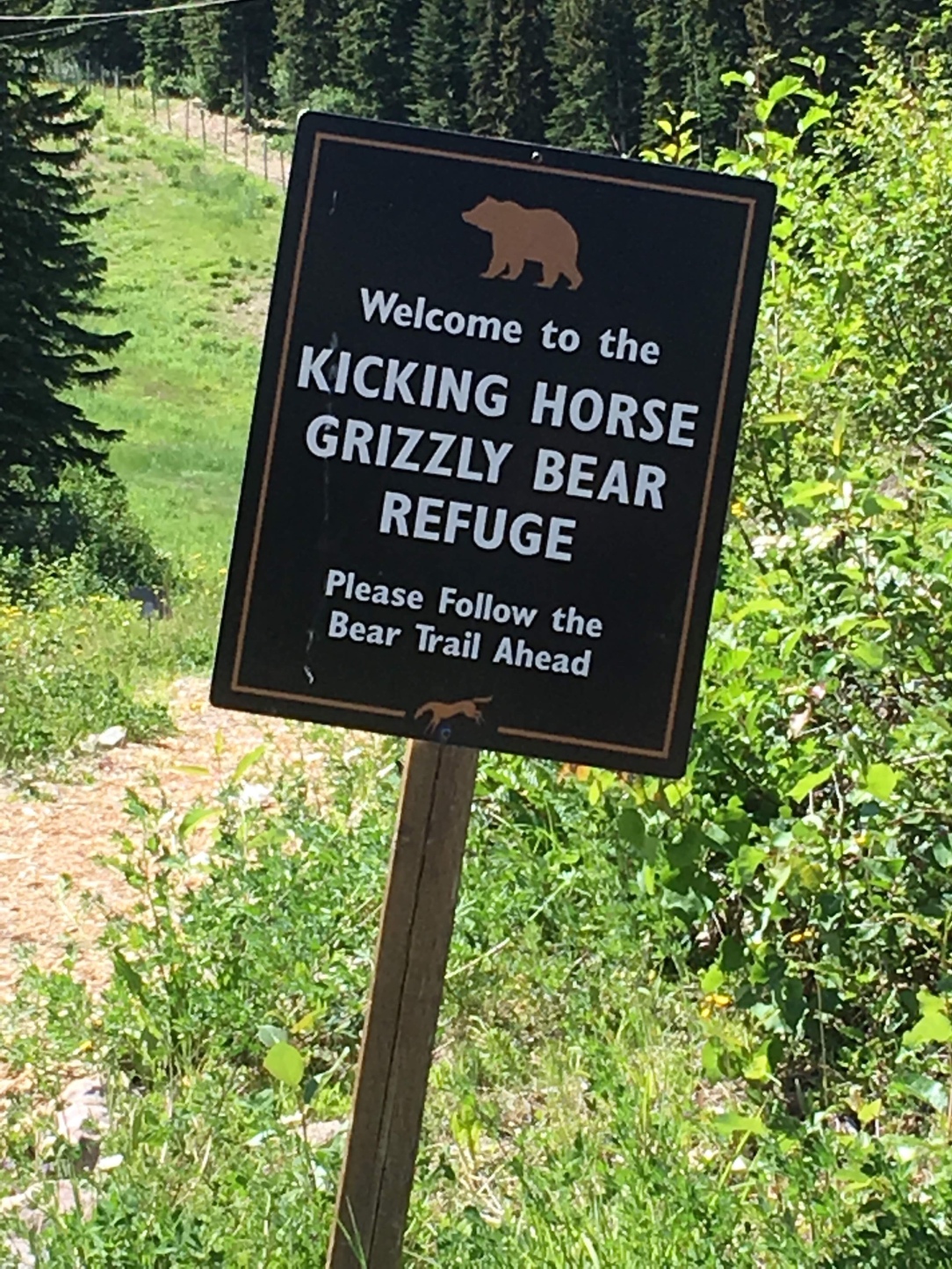 Now, I’m using the term “hike” very loosely here since we had no gear, the wrong shoes, are kind of out of shape from having desk jobs, and no clue about what to do in a hiking emergency. Just vote us least likely to come back alive.

We chose the easiest and shortest trail aptly named CPR ridge. And then, we took what in hindsight now was likely a side detour onto what was probably a moderate to hard trail I would have named “deathwish” or “panic attack” because at one point a misstep would have resulted in sliding down the steep gravel slope with no clue as to how we’d get back up. Did I mention we were 8000 feet up? I thought we were dull and boring people but no, apparently we are the people you read about in magazines after they make poor choices and get trapped overnight on mountains and large search crews have to rescue them and the rescuers get medals for bravery.

Ok so maybe I’m over dramatizing a little bit. We made it back safely, no harm to anyone, only one slip on the slope and only one moment of panic when I wondered if I was going to make it up the steep ledge. Easy peasy.

Late lunch was the whole reason we were there and it did not disappoint. Eagle’s Eye restaurant sits on the peak and is the highest elevated restaurant in Canada. It comes with an incredible view and also has great food. This was our planned anniversary dinner out, and after narrowly escaping death/having a panic attack on the trail, I had zero guilt ordering the big glass of red wine to go with the steak and parmesan truffle fries. Of note: Hester Creek’s cab franc is a delicious red to go with a serious meal.

Dinner and death confronted, we headed back down the mountain and hung out for awhile. We visited Whitetooth Brewery later on in the evening to sample some of their craft beer and walked around town for a bit.

Day three was a road trip! Lots of kilometres added to the car this day as we headed further west through Rogers Pass towards Revelstoke and a bit beyond. We visited a suspension bridge which was just on the edge of being a tourist trap and then the Enchanted Forest which I though was going to be a tourist trap but wasn’t. It’s hard to tell sometimes.

Enchanted Forest does have kitsch, poorly sculpted scenes from various fairytales BUT, and it’s a big BUT, the forest is the draw. Tall cedars that are hundreds of years old and farther trails that lead across boardwalks, rivers teeming with salmon at the right time, and air that smells as sweet and clean as any you had ever breathed. Seriously. Gorgeous. Oh, and following the fairytale/story theme, the bathroom is named the “Pooh” house. So there’s that.

After that we visited the Revelstoke Dam. Because my husband was with me and he is into technological stuff. Know what? That was also cool and worth the trip and the time we missed the turnoff and went the wrong way for ten kilometres. Also our first clue that maybe Waze isn’t as good as Google maps.

The Dam was actually pretty interesting. A huge engineering feat that you have to see to appreciate. They also had a 3D display of a good portion of North America showing where the Columbia River flows. Who knew?

Revelstoke back to Golden for a quick break and then back on the road to Radium Hot Springs, to visit the, well you guessed it, hot springs. Run by the government the springs were well kept and beautifully managed. Too hot maybe for July, I’d love to visit in October. It was a relaxing way to end the day. 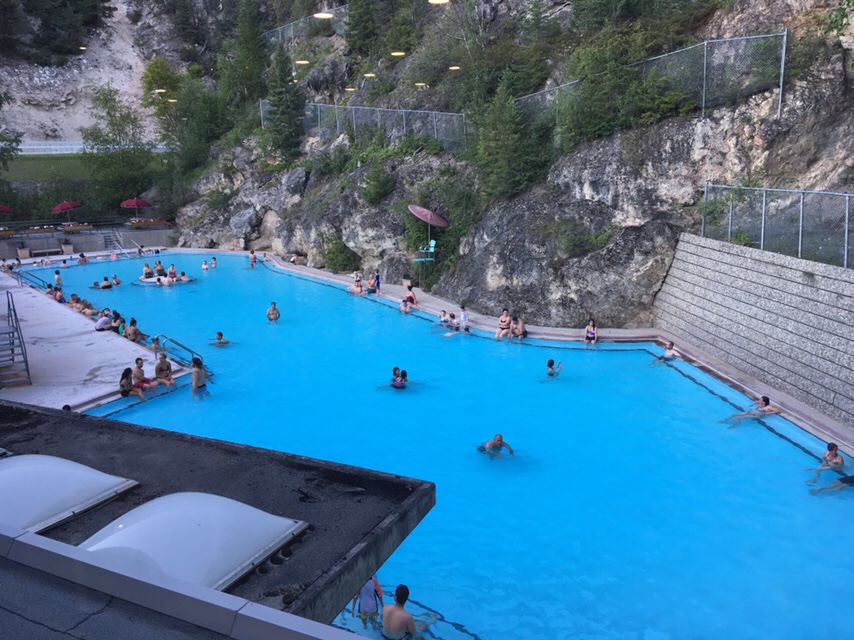 One thing I didn’t know before I went was the history in the Rockies of bringing in Swiss mountain guides early on. You can see the influences in some of the architecture, and, the presence of Austrian/German restaurants. We ate at a local restaurant that had schnitzel, spaetzle, and red cabbage as a special. It was delicious and not lost on me the fact that the food I though I was going to get in Berlin (which I didn’t), I actually got in BC. 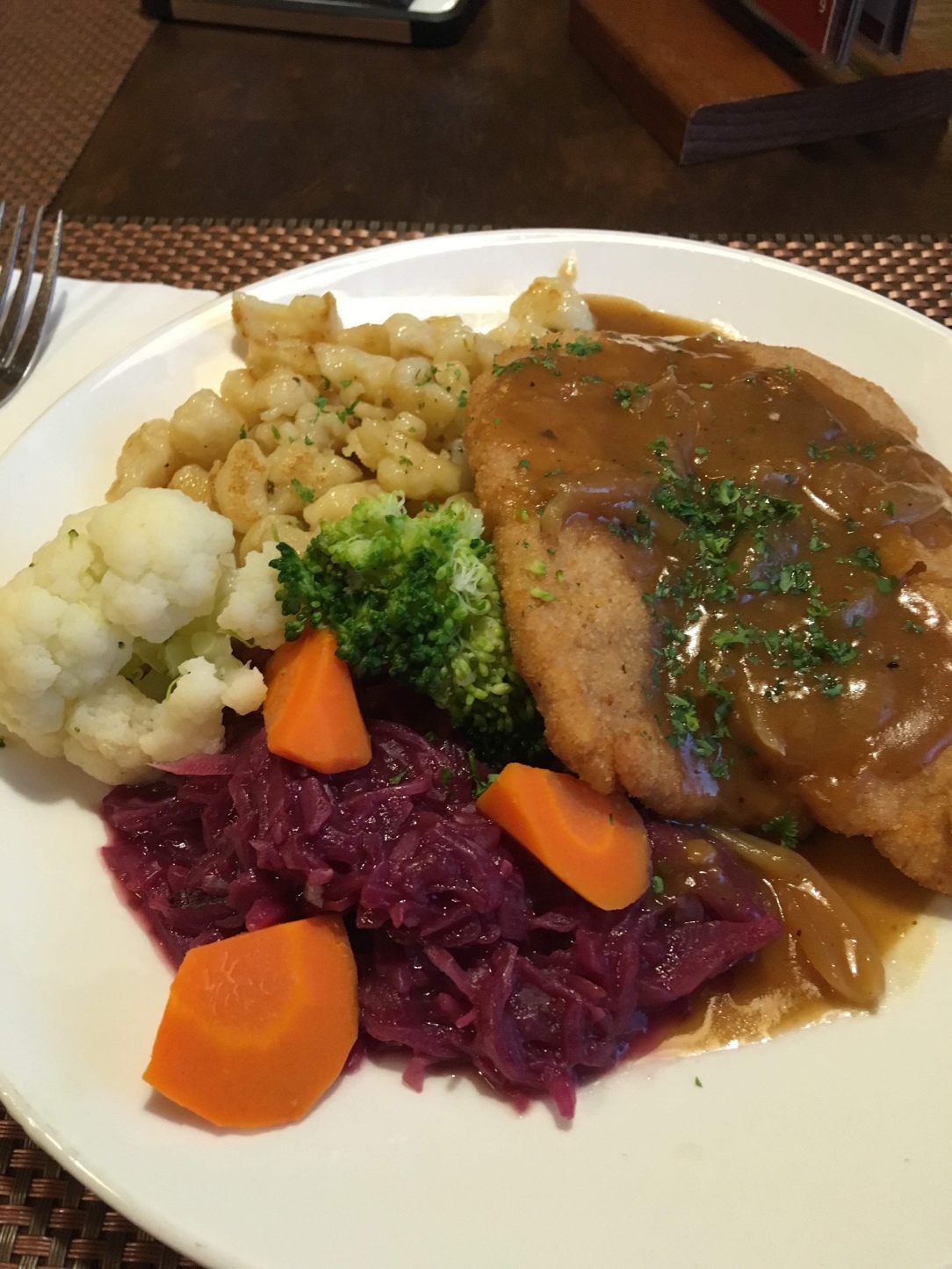 Three nights in Golden complete, we headed into another marathon day of driving. Back to Alberta, stop #1 in Lake Louise where every Canadian is obligated to visit and show photographic proof at least once in their life to maintain Canadian citizenship. This is true, and you get bonus points if you remember watching the CBC Christmas special from there when Kurt Browning was figure skating on the frozen lake in front of the Fairmont Chateau Lake Louise. As Canadian as it gets.

Next stop was McDonalds in Calgary for a time out. Because after four days together, and two long days of driving (even in an excellent SUV) where maybe your waze app isn’t working because it’s slow on the “turn here” messages so you keep missing turns, it is sometimes wise to park the car and go for a little walk in opposite directions. Which we did, and then we reconnected over a mcwrap, and hit the road again using our nice words and Google maps.

Two more hours west and we stopped at the Horseshoe Canyon just outside of Drumheller, aka dinosaur central. We stopped there because there are supposed to be some bone beds with easy access to hike and view them yourself. You have to leave them there, but still, the chance to see them in the ground is crazy. Sadly, they were working on the trail and access down to the bottom of the canyon was not available this time.

We took some photos and cut our loses, a little disappointed that we couldn’t get closer to the layers of coloured soil rocks and clay until we drove into Drumheller and realized that the entire town is built in the valley surrounded by the same canyon walls.

Time was short so we skipped the museum (next time) and visited the things our server at the Eagle’s Eye, a Drumheller native, recommended. The suspension bridge (not a tourist trap), the Hoo Doos, and the 11 bridges to Wayne (population 31). All three were a worthwhile adventure, particularly the Hoo Doos where we were free to roam and explore the area. I really can’t describe it, pictures probably don’t do it justice, just try and go sometime.

After Drumheller we headed back to Calgary as that’s where the hotel was. Dinner was amazing, we ate at a place called “Big T’s BBQ and Smokehouse”. Nothing nutritionally redeeming here. I entitled my trip-advisor review: If this is wrong, I don’t want to be right”. Obscene amounts of meat smoked after being dry rubbed and them smothered in their homemade BBQ sauce. They should have a defibrillator on site, maybe they do, I was too busy eating brisket and ribs. I promise my next post will be vegetarian to make up for it.

After such a long day we were exhausted and pretty much went to bed for a long sleep. The hotel in Calgary was a newer, well rated boutique hotel called Hotel Elan. Nice rooms and gorgeous bathrooms. We must be getting old because the touch sensitive light switches were too hard to figure out, let me tell you though that there is such a thing as heated toilet seats and Hotel Elan has them.

They also have the best hotel breakfast I’ve had in North America, and the manager stopped by our table, wished us a happy anniversary (I had mentioned it in the booking) and gave us a gift certificate for a local restaurant to celebrate. So kudos to Hotel Elan, you need to visit.

Last day was our free day. We slept in, had late breakfast, hit an outlet mall because there was still room in our carryons, and returned that sweet SUV to the rental agency. We both teared up a little leaving her behind.

We got to the airport in time to board the plane and wait out a thunderstorm. ETA two hours late.

Another trip done. I promise you there are some recipe posts coming, but a little adventure was due.

2 comments on “Road Trippin’ Around The Rockies”