By contentendedkitchen in musing, Travel, Uncategorized on May 5, 2018
No comments

It was a big busy day. No disasters or awkward dinners. Success all round for everyone involved.

The first thing you should know is the English eggs are a thing, and by that I mean they are delicious. Plain old eggs. I have no clue what it is or why but the yolks are a deeper colour and the flavour is richer and it makes a simple breakfast of eggs and toast something memorable. Eggs at home are ruined for me now.

After breakfast we did our fancy walk past Buckingham Palace, through St James Park across the street the Churchill War Rooms where they’ve made a museum out of where Churchill, his cabinet, and staff hid during the blitz. The lineup at opening was still an hour to get in, but it really was something to see. The was a museum section additionally dedicated to Churchill himself and if nothing else take hope in the fact that his greatest season of strength and leadership started at age 65, so there is indeed hope for all of us. Whatever race you are running – you’re not finished yet. His Nobel prize for literature was on display, so there’s something off the bucket list. I’ve seen a Nobel. 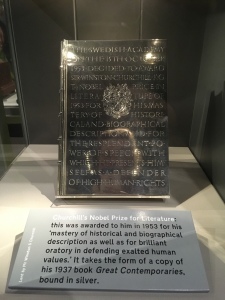 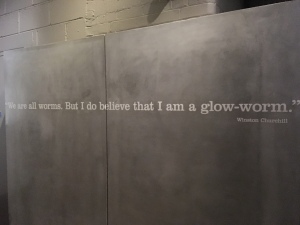 Next we walked up to Piccadilly, did some shopping and meandered over to Chinatown where we stood in another line for a bubble waffle. It’s all the rage, and it was good, but I’m undecided as to whether or not it’s a one time experience. Mine was chocolate gelato in a beetroot cone with brownies, chocolate sauce and rose petals. My daughter went for green tea gelato with red beans and mocha in a regular cone. 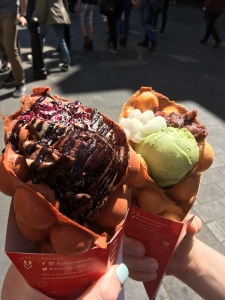 We did a quick stroll through Piccadilly market held at St James Church, which was really neat for two unexpected reasons. #1 they have free counselling for anyone in need, and #2 they let homeless people sleep in the church during the day so long as they are respectful. Both concepts are refreshing and quite lovely to see. 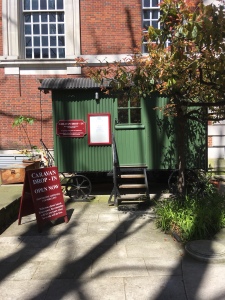 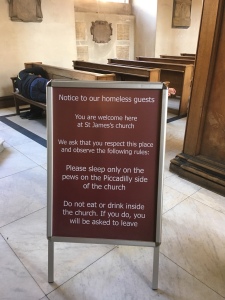 Next was back to the hotel for a rest before heading back to Piccadilly to catch Eric Whitacre and The Eric Whitacre Singers. If you know who Eric Whitacre is, you know that’s kind of a big deal. If you don’t, google “virtual choir” and “Ted Talk” . My daughter played three of his pieces in band over the years, so for us it really was a highlight and a fabulous experience to share.

After the show, we walk back to the hotel, going past Buckingham Palace -again (yawn), had a late dinner on the patio, and called it a day. 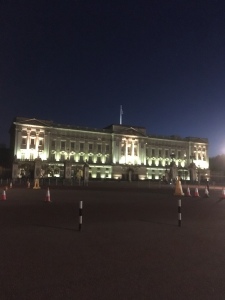 Fitbit has clocked us both at 21000 steps today, no wonder my feet hurt.